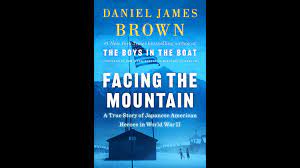 Daniel James Brown skillfully tells the stories of Japanese-Americans who struggled with these injustices and their remarkable resilience. At the beginning of the war, over 120,000 Japanese Americans were put into internment camps for the duration of the war. Many of these families lost their businesses, property and homes as they were taken to these camps. Fred Korematsu fought the order to report to the camps and took his case all the way to the Supreme Court. He lost that case and his conviction was not overturned in 1983. Other Japanese-Americans, after being sent to the interment camps, were allowed to join the military and fought with distinction in Europe and in other sections in the U.S. military. Others refused to join the war effort after being detained and suffered the consequences for their decision to resist.

Why read this book?
It is important to see the injustices that have affected others. It is also helpful to see how courageous people responded to injustice in very different ways. These stories give us courage, hope and determination to be people that pursue justice in our own sphere of influence but also in our communities.